Due to the Covid-19 pandemic, Euroweek 2020 and 2021 have been cancelled. But we are happy to announce that Calmare Internationella Skola in Kalmar, Sweden and Kalundborg Gymnasium in Kalundborg, Denmark will host Euroweek again in September 2022.

Sadly we have had to take the decision to cancel Euroweek 2020 due to the global coronavirus pandemic. It’s a great disappointment to us to have to cancel, but the safety of our hosts and guests has to come first.

We would like to say a massive thank you to everyone who has helped organise so far and all the wonderful people who signed up to host.

Euroweek will continue! It is due to be hosted in Sweden in 2021 and we wish the team there all the best.

And to all our European friends – stay safe, and we’ll see you soon.

Talking about Euroweek we are often asked – but what about Brexit??

So what about it?

Officially Euroweek is not an EU project, it is an independent event organised by a network of schools spread all over Europe. However it has always carried the spirit of European integration and the other countries involved are all members of the EU.

Back in 2016 after the result of the referendum we wrote to the other schools involved in Euroweek and asked them what they wanted to do. We explained that we would like to carry on with the project, but would understand if they wanted to keep it for EU members only.

We were overwhelmed by the kind responses. Everyone said that they wanted us to carry on and that the referendum result made no difference. “Euroweek is about friendship – and you are still our friends” said one country’s representative.

And that sums it up really – Euroweek is about people not politics.

So what happens in a typical Euroweek? The exact program varies depending on the host country, but over the years some activities have become traditional and happen at every Euroweek. This short series of blog post looks at some of these traditions.

The flag parade is the first official Euroweek event and it happens in the morning of the first day. Every delegation is officially presented with their flag and everyone parades together around the host town. 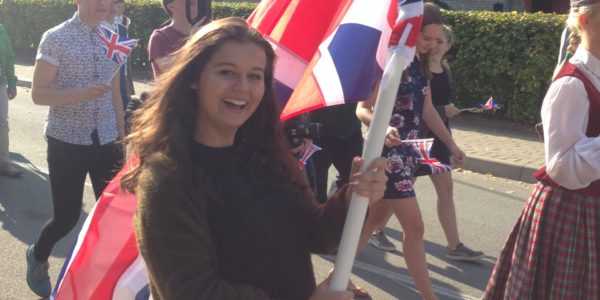 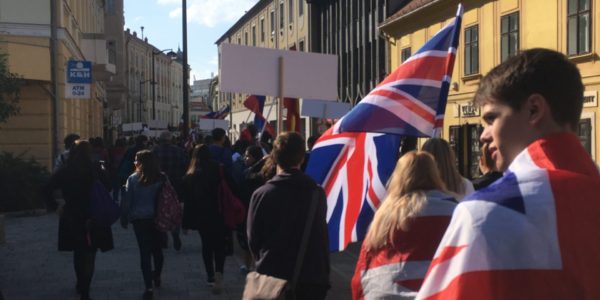 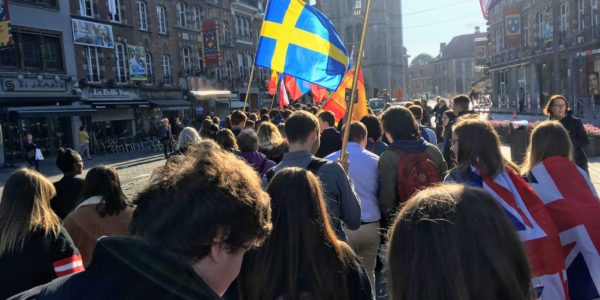 The flag parade is a big spectacle and local people often come and watch. In Romania the flag parade ended in spontaneous dancing on the steps of the town hall, and in Belgium students performed a flash mob in the main square.

After the Polish delegation had to sadly pull out of hosting there was some doubt over who would host Euroweek in 2020. A few countries were willing to host in future years but 2020 looked uncertain.

We are happy to announce that Aquinas College in Stockport, UK has stepped forward to host. With less than a year to prepare the team face a busy time ahead, but are determined to put on a good event, with all the traditional Euroweek activities.